The Earth from Space Institute (EfSI) concluded its inaugural Symposium entitled, Making Communities More Resilient to Extreme Flooding on October 31, 2019. The event signified the launch of a new research initiative from Universities Space Research Association (USRA), with the aim of revolutionizing disaster response and community resilience through space technology.

Nearly 160 were in attendance for the two-day event, which welcomed a diverse cadre of individuals from across academia, government, philanthropy, industry, and the media to discuss solutions for improving community resilience in the face of extreme flooding.

The Keynote speaker for the event was United States Senator Chris Van Hollen (D-MD), who opened the proceedings with a call for the government to embrace the scientific consensus on climate change, and for continued research in applied Earth observations. “With a changing climate we can expect more disasters, more extreme weather, and we’ll need to use this data more and more from our satellites and space-based instruments to address challenges to our communities,” he remarked. The Senator, an ardent advocate for environmental issues, also drew parallels to the challenges faced locally in the state of Maryland, from the recent catastrophic flood events in Ellicott City to water management in the Chesapeake Bay. 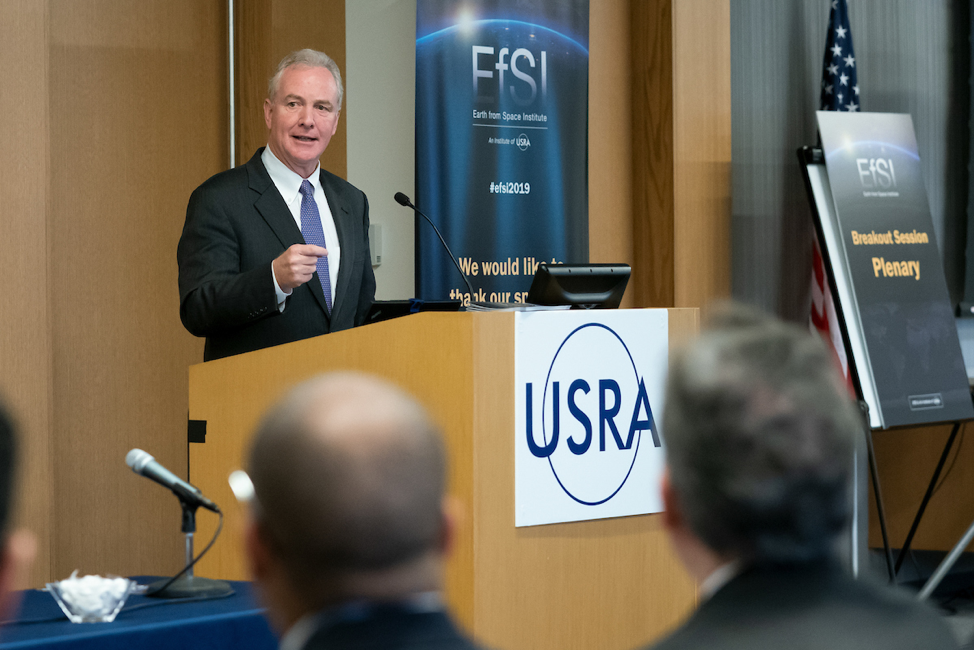 Resilience Starts at the Local Level

The first session featured decision-makers, emergency managers, and researchers working locally on Flood Resiliency in the State of Maryland. Moderated by Howard County Executive, Dr. Calvin Ball, the session was the first of several to emphasize the critical need for local engagement when considering flood resilience. Panelists noted how socioeconomic concepts like financial literacy, food deserts, and economic development gaps can drastically affect how communities respond to―and recover from―flooding. Flood managers therefore need to elicit direct input from those who are most affected.

Similar sentiments about the importance of local perspectives were echoed in sessions on Resilience in the Flood Policy Context. There, panelists emphasized the importance of fostering trust between government agencies and community members through effective communication of risks and uncertainties. 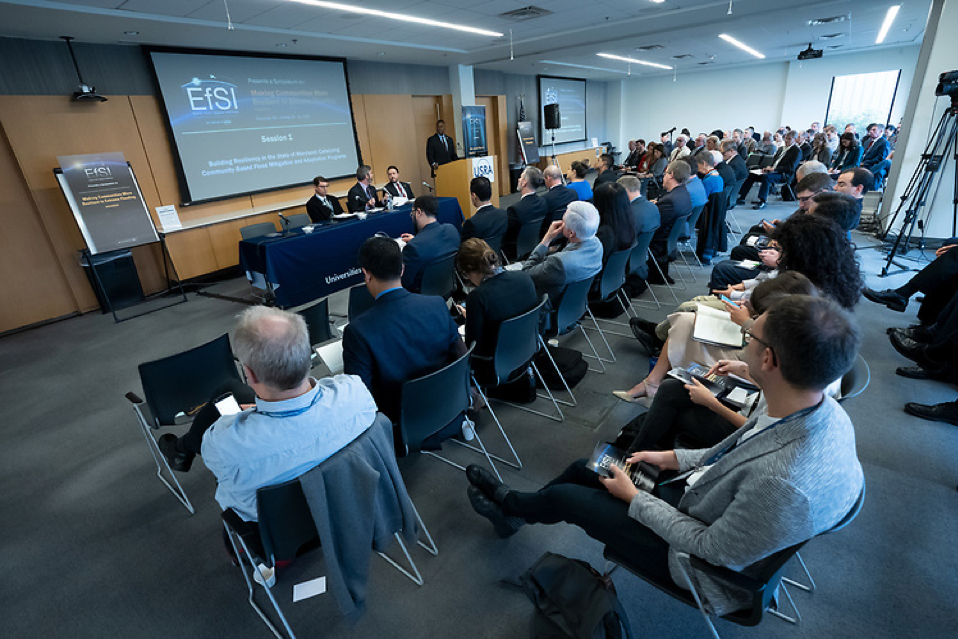 Communication was a recurrent theme throughout the proceedings. Flooding is an immensely complex phenomenon with multiple drivers and impacts. As such, those who only consider the geophysical processes or the socioeconomic concerns may have a myopic view of the problem. Multiple sessions highlighted the need for researchers to become more versed in policy terms and for government officials to better understand the science. Part of this process involves coming to a shared understanding of the language we use. A term like “urbanization” can mean different things when viewed through the lens of an engineer versus an economist versus a demographer.

Flood Risks from the System Perspective

Bringing together experts from multiple fields allows you to view flood risks as a system, rather than focusing on its individual components. This is an especially salient concept when it comes to flood protection. In a talk on Coastal Risk Reduction and Resilience, Plenary Speaker Mr. José Sánchez (U.S. Army Corps of Engineers) discussed how the combination of precautions like seawalls, raised infrastructure, and vegetated shorelines can contribute to a more robust risk mitigation plan. “We have to see it as a system. If I look at only rebuilding a dune, you only have one part of everything you need to make true resiliency I that community.”

Another session on Nature-Based Solutions expanded on the concept of an interconnected flood system. There, panelists outlined the ecosystem co-benefits produced by investments in non-structural flood mitigation practices. These co-benefits can often foster increased community buy-in, in addition to improving the resilience to the effects of flooding.

Flood Visualizations and the Role of the Media

A critical component of getting the word out to the general public is the ability to effectively visualize data. An entire session on Visualizing Flood Risk and Uncertainty expanded on how technological advances in machine learning, holographics, and 3-D applications can transform how people interact with data. Doing so allows researchers to turn information into insights, providing it’s done carefully. A particular emphasis was placed on the challenge of visually representing uncertainty, a concept that’s difficult for many who are unaccustomed to thinking probabilistically.

The media also play a central role in influencing how people obtain, understand, and apply information about flooding. In a session on Newsrooms and Data Journalism, panelists expounded on ways to adapt messaging according to the timescale and needs of an audience. A local weather forecast with updates on current road conditions may be meant for immediate consumption, whereas an article about climate change may be effective long after it’s published.

As a global provider of scientific value-added expertise in satellite and Earth observation resources, EfSI in invested in understanding how to use the right data for the right job. Multiple sessions discussed the opportunities and challenges of working with flood data. Panelists on a session on Next Generation Satellite Data outlined emerging technologies in flood detection. In doing so, they also recommended distilling data to its most essential components to avoid any being overwhelmed by the ever-increasing amounts of data being produced at all times.

Other sessions addressed ways how advances in flood prediction can improve resiliency by alleviating some of the most damaging effects. Plenary Speaker Professor Rick Luettich (University of North Carolina) demonstrated how modeling approaches can help us move from difficult concepts like exceedance probabilities to more scenario-based decision-making. 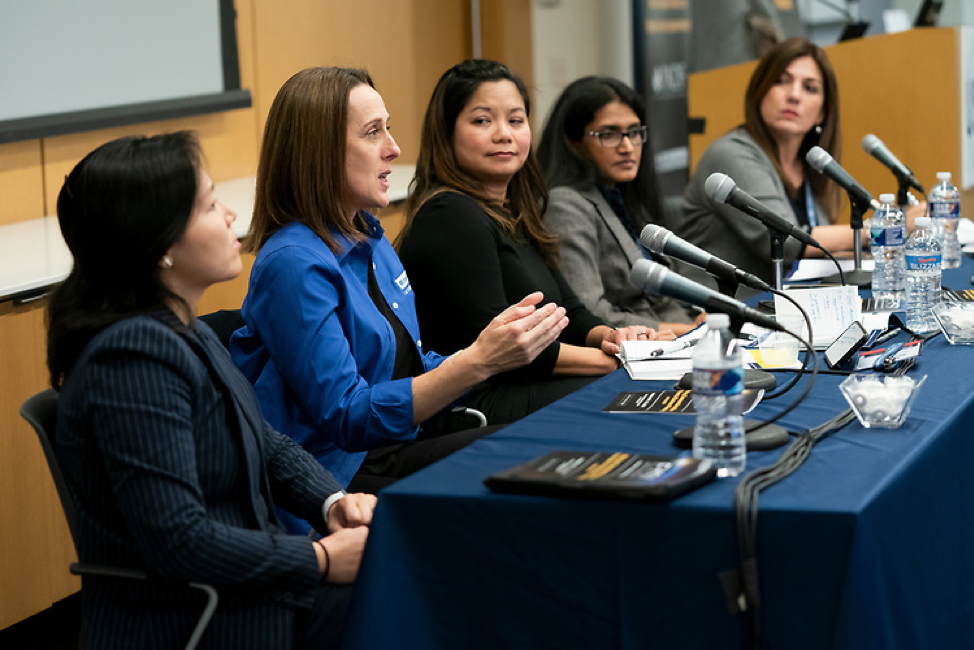 The breadth of subjects discussed throughout the Symposium speak to how diverse perspectives on a problem can contribute to a more holistic understanding of it. A similar emphasis on diversity was placed on those who attended, with an effort to ensure that the event reflected a range of backgrounds, cultures, and experiences. This was especially true for moderators―where over half were women―and for the panelists, which reflected a nearly even split between Government, Academia, Nongovernmental Organizations, and Private Industry sectors. In total, almost 100 organizations were represented among all attendees.

The need for diverse perspectives was also echoed in several of the session discussions. Flood events often impact low-income and frontline communities disproportionately, and there is a critical need to ensure those voices are heard―and listened to―when considering how to respond to an event. Nowhere was this applicable than in the final Plenary address from Ada Monzón (EcoExploratorio). Ms. Monzón, a celebrated science communicator and President of the Science Museum of Puerto Rico, detailed the arduous recovery process faced by Puerto Rico following the devastation of Hurricane Maria in 2017.

The EfSI Inaugural Symposium was the first of a series of biennial symposia organized by USRA that will continue to strengthen its framework of cooperation to foster more scientific and technical contributions to the decision-making process in the fields of hazard, risk, and disaster prevention. The event was recorded via livestream so that it could be attended virtually by a wider audience. Additional outreach was performed through social media, which allowed us to connect with more people (and in multiple languages).

Browse images from the event →