On July 23, 2018 the Xe Namnoy Xe Pian Dam in the Attapeu province of Laos (Lao People’s Democratic Republic) collapsed, flooding nearby villages, leaving thousands of people homeless and affecting public and private infrastructure, such as buildings and roads. In response to this disaster, a coordinated inter-governmental agency effort produced timely disaster aid by imaging the extent of the flooding.

Perry Oddo, a researcher affiliated with the Earth from Space Institute performed a rapid impact analysis to assess the possible socio-economic impacts of the flooding.  In coordination with NASA colleagues - estimates of flood inundation depths were overlaid onto local land cover, population density, and infrastructure data to produce provisional estimates of persons affected and flood damages (see image below).

The methodology used during this event has the potential to improve emergency response operations in the hours immediately following a disaster. The resulting ‘heatmap’ of potential impacts can be used to identify areas that may be hardest hit, and can inform flood responders about how to prioritize additional relief. Work is currently underway to expand this analysis to other parts of the globe to ensure it can be deployed operationally whenever disaster strikes. 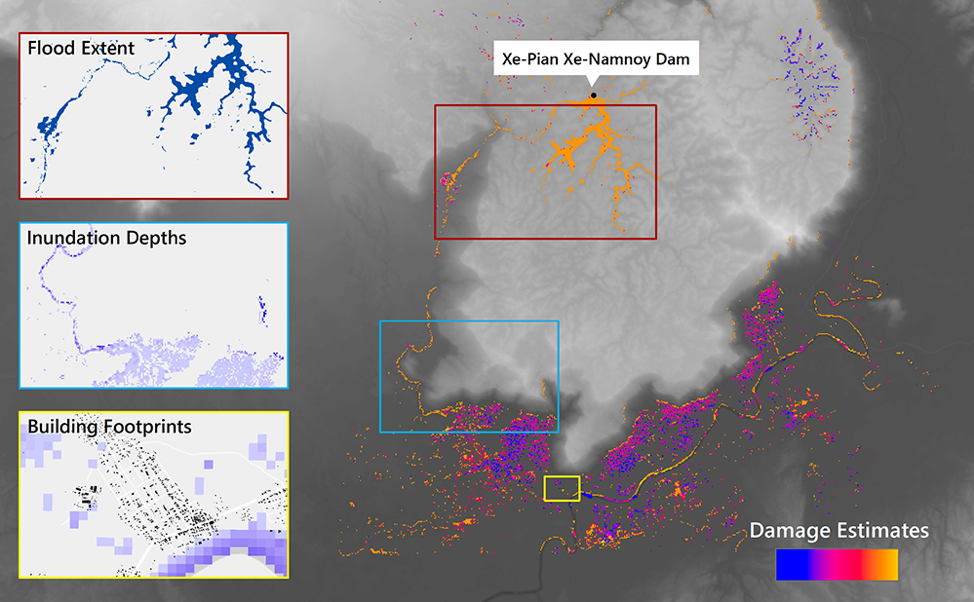 The left insets show flood extent, inundation depth estimates, and infrastructure inputs that were used in the rapid impact assessment. The right shows a ‘heat map’ of provisional damages representing areas that may be most highly impacted from the event.