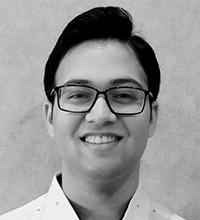 Growing up in Bangalore in India, seeing the stars wasn’t Aniket’s inspiration (since Bangalore’s skies are heavily light-polluted), but his own curiosity about what lies beyond the confines of planet Earth propelled his interest towards astronomy and physics.  This has led him to some big questions about planets around other stars – how to best detect them and how do they form?

While an intern at Caltech, he helped tackle his first question by working on reference star differential imaging (RDI), a technique which uses reference stars to model how a detector will see the light of the star of interest.  He optimized the technique through statistical selection of reference stars and methods to rank them according to characteristics of the star of interest.  All of this improves our capability to better detect planets outside our Solar System using ground-based telescopes.  At UT Austin, he also applied the RDI technique to an image of a star taken by the Hubble Space Telescope and showed that this technique could detect a baby planet in the process of its formation.  This offered insights into his second question.  Aniket says, “I realized that if a single image offered me the opportunity to tap into the origin of planetary systems, the possibilities for what I could discover in this rapidly evolving age of data-driven astronomy were endless.”  This work led to a research paper published in The Astronomical Journal.  Aniket is proud that he has been able to take a research project from start to a published peer-reviewed paper.

In addition to his own studies, Aniket is active in UT’s Astronomy Student’s Association, where he strives to empower K-12 students and the general public from diverse backgrounds to explore STEM and understand what being a researcher could mean for them and their own careers.  At UT, he also mentors fellow students, facilitating workshops on ethical and value-based leadership, and helping them translate their goals into actions.  He also advocates for and empowers students on the autism spectrum.

To relax from his busy days, Aniket may be playing the guitar, reading crime-thriller novels, or watching Formula 1 races.