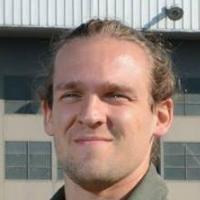 For as long as he can remember, Anthony Hennig has always been excited about space. His high school and college teachers made him curious about where he could fit into the space systems engineering field. He's excited that he's now getting to meet and get to know some of the people in the field whose work he's been reading. His summer internships got him involved with people who do mission and systems architecture design, which he will combine with advocacy for spaceflight as he pursues graduate studies in Systems Engineering at the George Washington University.

He has done a number of internships at NASA's Langley Research Center, including two summers with the Space Mission Analysis Branch working on concept development and feasibility for a mission studying the atmosphere of Venus. At RIT he started the Space Exploration Research Group focusing on space systems engineering. With students and faculty, Anthony raised funds, established a mission control center, supports senior design projects and is starting a 3U Cubesat project.

He thinks his 10-year-old self would be excited about what he's doing now, since he figured out a way to get involved with NASA and work on new space missions.

As a mentor, he is still active in FIRST Robotics, mentoring his high school team, as well as teams in Ohio and Virginia. He also serves as the Lead Robot Inspector for the Finger Lakes Region.

For students preparing scholarship applications and choosing references, he advises thinking about people you talk to the most, not just as a student, but as a friend and colleague. As he says, "The people you work with or talk with often (both professionally and socially) on topics of mutual interest tend to write the best letters."

Anthony participates in lots of sports, including broomball, soccer, running and weightlifting. He's also taken up astrophotography and trying to get back to playing music. And he's always out searching for new museums and local markets.