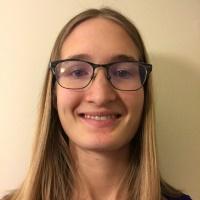 When Destiny Fawley gets into a topic that interests her, she goes deep.  In seventh grade while she was giving a presentation about the electromagnetic spectrum and stellar emission, her teacher stopped her and told her “to take about 70% of the information out so the other 7th graders could understand [it].”   In college, she has pursued research in the field of entry, descent, and landing (EDL), particularly studying the properties of supersonic parachutes for landing on Mars.

As part of her desire “to take every opportunity to learn about everything”, Destiny started research while a college freshman.  Although she has tackled challenging problems, she enjoys working on real engineering problems.  She learned hypersonic deceleration techniques while working with a graduate student on entry conditions for supersonic deceleration.   Later, while an intern at JPL, she researched parachute systems for entry into the low-density, supersonic Martian atmosphere.  She has plans to use wind tunnels to gather more information on supersonic parachutes, including stress analysis in the canopy, air flow in the wake of a slender body, and scalability of parachute size in a low-density, supersonic environment.  One of her more challenging projects was creating a 3D measurement of an arc-jet with stereo imagery.  While she had never before worked with 3D cameras, she figured out how to record image coordinates with 3D coordinates during the test, which had not been done, but which facilitates making recession measurements.

A graduate student mentored her while she was a freshman, fostering her passion for aerospace and guiding her as she found her interests.  Now that Destiny is an upper classman, she has done likewise for a freshman in the research group.   She also volunteers at various outreach events to K-12 students, running exhibits and encouraging the students to explore their curiosity as they ponder how the exhibits behave.

For her references for her scholarship application, she chose people who “had the best opportunity to see my work and passion firsthand.”