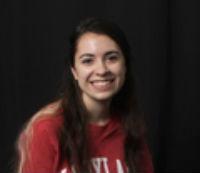 Emily knew from a young age that she wanted to be involved in astronomy and physics research, having grown up with both parents working for NASA. But it wasn't until college when she took a geology and astronomy course at the same time that she realized that she likes the interdisciplinary aspect of planetary science.

As an undergraduate she's participated in research characterizing exoplanet atmospheres using Spitzer infrared data. She has spent a year and a half on different aspects of this project, which has given her insight into how research evolves. She was also a summer intern at Johns Hopkins Applied Physics Laboratory working with mapping strips of the Martian surface taken by the Mars Reconnaissance Orbiter.

Emily has also led the astronomy club at University of Maryland, where she helps showcase the research opportunities available in the astronomy department to our members and organize events that get students connected with faculty members and local researchers. She is also involved with the Women in Astronomy club where members discuss the challenges and prejudices faced in STEM (and which she then introduces to the male-dominated astronomy undergrad club). She has also attended conferences for women in computing and physics which were invaluable experiences giving her a better awareness of their universal experiences.

She plans to pursue graduate studies in planetary science at Arizona State University.

Her advice for applying for scholarships is "to choose advisors and faculty members who can speak to your abilities in different areas. Ideally, all would be able to talk about your proficiency in research, but at least one should also be able to mention your commitment to outreach and your involvement in clubs/activities at your school. You should also make sure you know each of your references personally because a reviewer will be able to tell from the tone of the reference letter how well you know them."