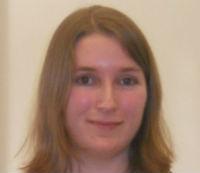 Emily has wanted to be an astronomer ever since receiving a telescope for Christmas as a young child. The sense of awe from the first time she used it has not faded. With her love of both math and astronomy, majoring in physics seemed like a natural choice. She is also drawn to the range of new, unfamiliar objects, and she gets excited about supernovae, black holes, dark matter, and dark energy. As an undergraduate, she studied the chemical evolution of star and planet formation at the New York Center for Astrobiology at Rensselaer. The more she learned about spectroscopy and astrochemistry, the more her interest was piqued and her career plans solidified. She has also been active in the Rensselaer Astrophysical Society, conducting public observing sessions at RPI's Hirsch Observatory. She's also done a number of imaging projects, both for classes and on her own, using the Observatory's 16" telescope.

After graduating from RPI, she'll be a Research Instrument Analyst at the Space Telescope Science Institute in Baltimore, Maryland.

For her scholarship application, she chose her references based on people who she thought had an opportunity to get to know her as a student. Her advice to students preparing applications is to be open in their application and not to overthink their responses.