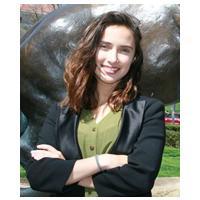 As a young girl, Joanna was interested in theatre and dance. But her interest changed when her father started working toward his undergraduate degree in electrical engineering. She found mechanical engineering more appealing because of its variety of applications. As a result of her subsequent experiences, she sometimes can't believe that her choices have led her on an incredible path.

As an undergraduate, she has worked on thermoelectric technology, optimizing the shape profile for a thermoelectric unicouple, which results in cost savings and weight reduction of spacecraft. As a result of her work, she and her team were invited by NASA's Jet Propulsion Laboratory to work on the design of the Europa Clipper probe. She has also participated in an engineering study abroad program to CapeTown, South Africa.

Recognizing the importance as a role model which she might have as a Latina engineer, she incorporated an education program into her local chapter of Tau Beta Pi in which undergraduate engineering students from different disciplines travel to K-12 schools, exposing students to engineering and exposing teachers to "interactive modeling" methods. She is also active in the Society of Hispanic Professional Engineers, helping Hispanic high school students fill out their FASFA form to assure they can afford a higher education and most importantly helping them become aware of their education opportunities. Joanna wants to be at the forefront of creating a more diverse engineering workforce.

In her free time, Joanna remains interested in theatre and dance.