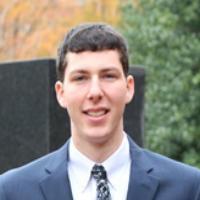 Joseph has always been interested in outer space and space flight. He was active in his high school's robotics club, so studying aerospace engineering seemed a natural fit. He enjoys exploring ideas which have never been done, and which "could literally open new horizons for human exploration."

As an undergraduate he participated in research project in partnership with NASA Goddard Space Flight Center, creating a testbed for relative navigation sensors and control algorithms. Joseph has also interned at Goddard , optimizing reaction wheel design for cubesats. His mentor challenged him, but also guided him as Joseph taught himself so he could better perform his summer research. As a freshman and as part of his coursework, he participated in high-altitude balloon payload development. Since then, he has mentored the freshman teams. He has also volunteered for a number of organizations and activities, including the Science Olympiad, on-campus competitions for local high schools and middle schools, teaching them not only the engineering, but also that engineers and mathematicians are cool people to hang out with.

His advice for those applying for scholarships is to choose references "who can speak to the same projects that have inspired them to choose their current career path."

In his free time, Joseph figure skates, which he says is the "only activity I've ever found that is more challenging than building spacecraft."