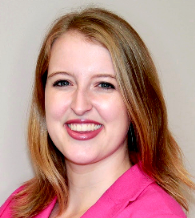 Katherine (Katie) Melbourne has had quite a number of adventures along the way in her education in astronomy and launching a career in civil space engineering.  Most of which she created for herself.

Katie has always been interested in science, and her teachers and parents exposed her to many different fields.  She was drawn to astronomy because of its place in answering big questions, and because she “loved seeing how studying astronomy could take me down so many different career paths.”  Her internship at NASA/Goddard Space Flight Center, where she studied M dwarfs and exoplanets, shaped her approach to research and made her a better scientist.  But she has also interned in the Office of International and Interagency Relations at NASA Headquarters, where, among other projects, she used her diplomatic skills so NASA engineers could travel to Russia for a workshop.

But before this, she created an internship for herself by taking advantage of a collaboration between the astronomy departments at Yale and the University of Chile in South America.  She reached out to faculty at UChile to become the first Yale astronomy undergraduate to enter into a research program with them.  She worked out the logistics and found her own funding so she could spend the summer studying exoplanets at UChile (while also practicing her limited Spanish).   Her positive experience and excitement inspired some of her fellow astronomy undergraduates to pursue this opportunity in subsequent summers.

Katie has also shared her journey with others, becoming co-President of Yale Women in Physics.  This group gives women undergraduates a community within physics and astronomy, and an opportunity to share their experiences through outreach events to middle school students.  Katie plans on continuing to encourage particularly to young women in STEM as she continues her own career.