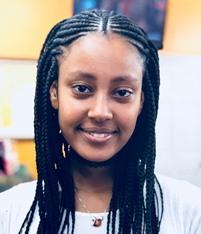 Mahlet Shiferaw grew up reading “lots and lots of fiction”.  When her mother encouraged her to read nonfiction, she found that books about space time, the big bang, and inflation seemed to be the same as reading a fantasy book.   In high school she finally felt she could seriously pursue those interests.

As an undergraduate, Mahlet has had the opportunity to pursue research in fields such as gamma ray bursts, galaxy formation, and the intersection of computer science and astrophysics (which she has found particularly fascinating).   She is interested in further pursuing her interest in cosmology, the inflationary state at the beginning of the universe, and numerical simulations.  Mahlet feels there is still much to discover, and that “Astrophysics is a great place to be right now.”

Mahlet is passionate about helping women and women of color pursue STEM careers. In high school, she became a lead Junior Mentor for her local chapter of Science Clubs for Girls, which supported underrepresented girls in science education through workshops and mentoring.  As part of her love for drawing, she has created an animation and comic about young women exploring their love of space, and difficulties women encounter pursuing STEM careers.  While at Harvard, she participated in the Conference for Undergraduate Women in Physics (CUWiP), and has begun organizing dinners for Women of Color in STEM.  She says, “I hope to further the path that has been paved by others before me, for those who will come after.”