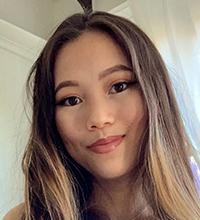 As a child, Megan bonded with her grandfather by accepting his invitation to work on math and astronomy workbooks with him.  Growing up she had a strong love of learning, and always did well in math and science, but she usually suppressed that in favor of more stereotypically feminine things.  But encountering the abstract but logical notion of physics in her high school AP Physics class changed everything, and she realized that science was not just “a boy thing”.  She jumped at the chance to study astrophysics in college.

At UCSD she caught the research bug when she joined a team searching for and identifying active galactic nuclei, which are galaxies which have an active massive central black hole.  She subsequently interned at the Berkeley SETI Research Center, and work continued the work of her mentor, Dr. Sofia Sheikh in calculating and documenting the drift rates of exoplanets.  If extraterrestrial life were to send us messages from a planet orbiting a star, the orbit would slightly distort the message resulting in a drift rate in the signal.  She has continued this interest and is excited to wake up every morning with a chance to look for aliens!

Megan says, “The most fascinating thing about research is that there are so many unanswered questions.  In classes, every question has an answer already.  I often come across mysteries that no one can answer yet.”

Megan is most proud of being the Founder and President of Big Sister STEM, which provides cost-free mentorship to girls (“Little Sisters”) in middle school and high school.  She leads and mentors a team of more than 20 Big Sister mentors, who are female-identifying students or recent graduates of UCSD, UC Irvine, and UC Berkeley.  Each Big Sister meets with her Little Sister via weekly teleconference to explore subjects and careers in STEM, set academic and career goals for the Little Sister, teach/learn basic coding, conduct at-home experiments, and more.  Megan also plans and presents bi-monthly seminars on topics such as seismology, engineering, and sustainability.  Her goal is to help the girls see that they belong in STEM careers.