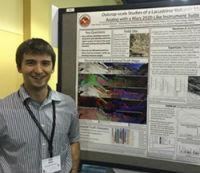 From his childhood up until near the end of his undergraduate career, Peter had planned on a career in aviation. He majored in chemistry at Wesleyan, but then took a planetary geology class in his freshman year which he really enjoyed. So he double majored, and then jumped at the opportunity for a research position with the planetary geology professor. Now he's a graduate student in geochemistry at Caltech. As he says, "I suspect my 10-year old self would be pretty shocked to find that I had found anything to motivate me away from airplanes!"

While an undergraduate, he did research on liquid water stabilization on Mars, and worked on redesigning and building a chamber to simulate the atmospheric, temperature, and pressure conditions on Mars. He used part of his USRA Scholarship money to attend the annual Lunar and Planetary Science Conference in Houston. His undergraduate research experience introduced him to how research works, and gave him the background to do what he's doing now. This undergraduate experience definitely influenced his decision to go to graduate school and consider a career in "something as esoteric and planetary-oriented geochemistry." And now that he's a graduate student, he enjoys the fact that he gets paid to be curious!

His advice to undergraduates applying for scholarships or grants is to "honestly and eloquently express your excitement about your research...without sounding impossibly overzealous." Students should learn to "to express your enthusiasm in such a way that it is clear that you care and are knowledgeable about a precise topic."