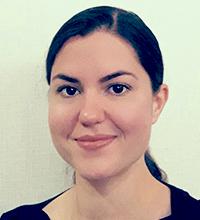 Reading Scott Parazynski’s The Sky Below inspired Sarah that space could be her next great adventure.

Sarah grew up in a town where it’s likely there are more cows than people, and young women were not encouraged to become scientists or engineers.  She thought being fighter pilot would be the coolest thing, but didn’t really consider being an aerospace engineer.  She was always interested in science and went to Rice University.  To help fund her education, she enlisted in the US Navy, where she proudly served and enjoyed six years as an aviation ordnanceman, dealing with weapons equipment, missiles, and bombs on F/A-18F Super Hornets.  It was then, relaxing one evening, she read Parazynski’s book and realized his experiences mountain climbing, diving, exploring new places were interests similar to her own.  When her enlistment ended she enrolled at Embry-Riddle to set out on her own great adventure.

As part of ERAU’s student chapter of the American Institute of Aeronautics she became Science System Lead for a two-year student led solar monitoring 12U CubeSat.   She has also developed a prototype to meet NASA’s Micro-G NExT Challenge, and designed a Space Suit Attachment Quick Release System to be used on the utility belt of the xEMU in lunar applications.  She has also interned at Northrop Grumman focusing on design and structural analysis.  She has served as the AIAA Chapter President, motivating and leading students on a variety of projects.  She thinks, “If younger Sarah saw me now, I think she would be proud, fascinated, and hopeful in a way that I wasn’t afforded the opportunity to be as a child.”

Sarah writes, “I want to show young underprivileged girls they really can be anything, no matter the obstacles or who supports you.  If I can go from being a first-generation student to an engineer working in the space sector, so can they!  It doesn’t matter who you are or where you come from, if you have the passion and the drive, you can do anything.”