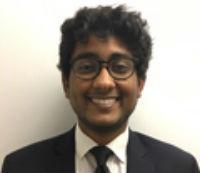 Shreyas always thought that space was "really cool", and watched NOVA and Bill Nye reruns with his family all the time. As a 10-year old, one of his favorite biographies was on Einstein. In high school he participated in the astronomy competition as part of the Science Olympiad. When he got to college, he took a few astronomy classes, got involved in research, and as he says, "never looked back."

As an undergraduate he did research in astrochemsitry on models of prebiotic chemistry in the interstellar medium. He had the opportunity to co-author a paper on water formation in the ISM, and worked on another paper describing improvements to astrochemical carbon networks.

During the summer of 2016, Shreyas was at Leiden University in the Netherlands, where he participated in astrochemistry research through the Leiden/ESA summer student program. This experience solidified his career path - before then, he knew that research was something that I enjoyed doing, but LEAPS was the first time he was able to experience a truly global research community, and it made him realize this was something he absolutely wanted to do.

He enjoys doing research because there is so much we don't know about the cosmos, and, as he says, "to be on the forefront of that quest to know more always yields really interesting and cool experiences!" He also enjoys teaching people about what he's found in his research.

Shreyas will be attending Caltech to pursue a PhD in Planetary Sciences.