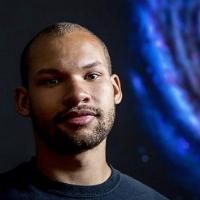 Tyler became interested in astronomy and physics in high school with his first physics class. In college, he became passionate about planetary science and began to study space exploration in his free time, eventually stumbling upon articles about asteroid mining. Since then, he has spent much of his academic career studying resource extraction from planetary bodies. Along the way, he has become a student leader with a focus on empowering underserved, underrepresented, and marginalized students. All said, he's proud to have pursued a path that others said would lead him nowhere - especially not towards what they deemed a "real job."

Tyler has pursued his interest in space technology both at University of Washington and as an intern in industry. He worked on the orbital dynamics for UW's HuskySat-1 3U CubeSat and served as Project Manager and Systems Engineer, overseeing the work of 40 undergraduates in the development of the satellite. From there, he transitioned into an internship position at Planetary Resources Inc., where he helped plan their asteroid exploration mission. Because of these experiences, he looks to mix space science and space engineering throughout his career, with the ultimate goal of "apply[ing]space and planetary science knowledge to improve and develop ... space mining technologies."

Outside of his academic work, Tyler wants to encourage Black students and other students of color to pursue higher education. To that end, he co-founded a student organization, Scholars Pursuing Academic and Celestial Explorations (SPACE), funded by the Washington NASA Space Grant Consortium. He leads teams of undergraduate students to engage with K-12 students in the Pacific Northwest, particularly underserved, rural, and tribal communities. By the end of his junior year, they had served over 1600 students (as he says, "many but too few") with planetarium shows, talks at the Seattle Museum of Flight, model rocketry showcases, and workshops to help students improve their problem solving skills.